Bringing together all the best features of traditional two-way radio ‘walkie-talkies’ and modern mobile broadband networks, Push-to-talk over cellular (POC) delivered by Hydra Network’s cutting edge technology delivers all of the benefits and none of the drawbacks.

For many decades, numerous types of business and government operations have been reliant on various forms of communications technology to effectively and efficiently coordinate their teams. Across the wide working areas involved in airports, construction sites, hotels, events and sports arenas to the multiple mobile units of industries such as transportation, freight, maintenance and repairs, not to mention emergency response and government agencies, a practical method of instant communication is often indispensable.

Traditionally, this need was served by two-way voice communications using land mobile radio, ‘walkie-talkies’ with limited range transmitting on specified frequencies or over wide area networks which still suffered numerous challenges with respect to coverage and penetration.  More recently the technology revolution has transformed the communications industry. Increasingly sophisticated generations of wireless mobile telecommunications technology have led to the smartphone becoming an all but constant feature of our lives. We now think nothing of communicating via voice calls, text, picture or video regardless of where we or the recipient are physically located. It goes without saying that this level of connectivity has transformed the way we live, work and do business and industries expectations of what business communications should be delivering. 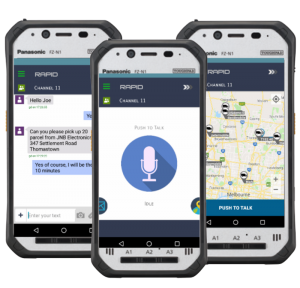 While these mobile devices provided one-to-one communications, they did not, however, provide the same instant voice communication between larger groups which traditional radios had been much valued for. This was a significant failing in terms of meeting the communication needs of many professional business users where team communications is critical.  Clearly and efficiently coordinating their disparate team members necessarily meant instantly communicating with the group as a whole rather than undertaking a lengthy series of individual calls.

The two-way radio industry initially looked to harness the power of the new cellular networks, moving away from the existing land mobile technologies. The protocol which underpinned most early Push-to-talk over cellular (POC) services, however, was based on (SIP) technology, essentially a mobile conference calling structure borrowed from the telephone industry. This involved frustrating set-up delays and, once again, the vital functionality of instant communication between individuals and larger teams was not achievable.

With the speed, capacity and coverage of Hydra’s dedicated secure networks, Push-to-talk over cellular (POC) can finally serve all the communication needs or modern businesses and organisations, both today and as the technology continues to develop. Our networks are constructed around the revolutionary Intelligent Radio Protocol (IRP®), designed and built from the start as a leading edge system for effective, fast and secure two-way team communications. In contrast to conference call protocols, this provides for truly instant communication between individuals and between wider groups at the touch of a button. This advance in Push-to-talk over cellular (POC) technology means all devices are always ‘on’ and ready to receive, making set-up and transmission delays a thing of the past.

The capacity of Hydra’s cutting edge broadband networks also harnesses all the power and flexibility of the information age. Using a phone with push to talk functionality or a more specialised mobile handset as a Push-to-talk over cellular (POC) device, users can transmit not only broadcast quality audio to many team members instantly, but also utilise the functionality of text, images and high-speed data transfer to select the optimum means of communication in any scenario. In addition, Push-to-talk over cellular (POC) solutions can also provide greater situational awareness for all team members and for central command centre personnel.